IBM Research is a big proponent of the Immersive Internet, especially in the Digital Convergence business unit. But what about the IBM Software group – in particular, Lotus, which produces IBM’s enterprise collaboration software products? ThinkBalm’s theory about the enterprise immersive platforms market is that ultimately software companies that provide information worker infrastructure (like IBM) will deliver an immersion  layer that integrates with existing communication, collaboration, and content systems (see Figure). In search of validation (or invalidation, as the case may be) of this theory, this week I attended IBM’s Lotusphere conference in Orlando with one primary question in mind: Where does the Lotus group stand with regard to the emerging Immersive Internet market? 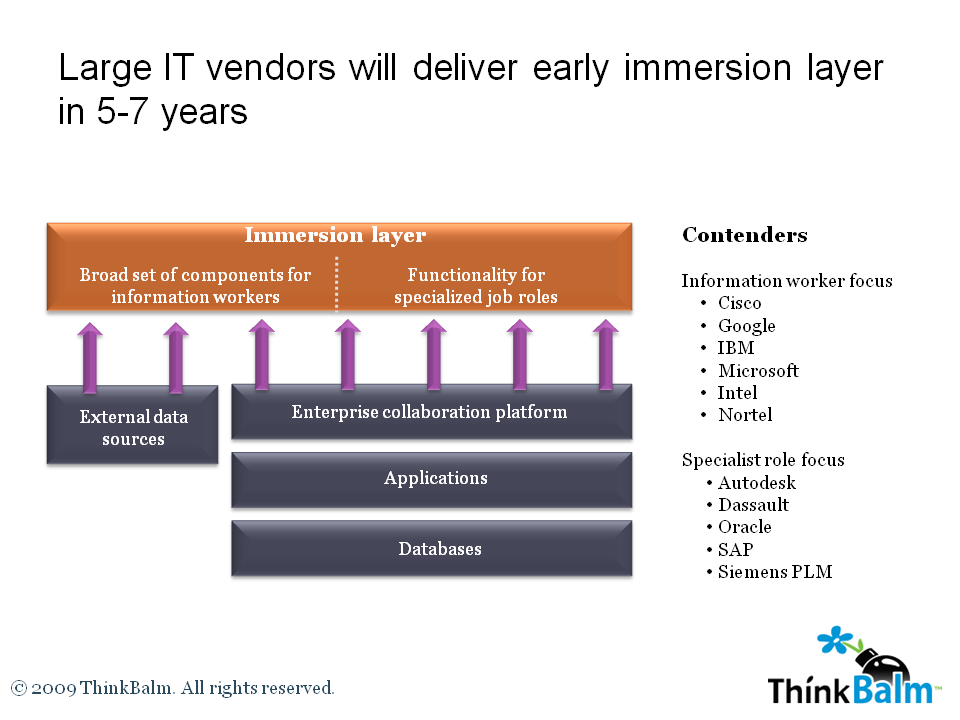 Searching for insights, I met with director of Lotus strategy Doug Heintzman, Lotus new business development executive Gopal Gupta, IBM Digital Convergence business unit marketing executive Karen Keeter, and others. I stopped by the innovation lab for a demo of Sametime 3D (see YouTube video below), which features collaboration spaces built in OpenSim and integrated with Lotus Sametime. In the innovation lab I also saw a demo of Olympus, a 2D Web overlay technology to add simple avatars to Web sites (in particular, Web conferences) in a similar vein to ROCKETON or Weblin. I wandered the show floor and visited Forterra Systems in their booth for a demo of the latest version of OLIVE and OLIVE integration with Lotus Sametime.

My takeaways after a couple of intense days at Lotusphere:

IBM as a whole is taking groundbreaking steps with the Immersive Internet. And ThinkBalm expects that eventually large IT providers like IBM will offer an immersion layer that integrates with enterprise systems. (For more on this see the Aug. 13, 2008 ThinkBalm article, Information work is going immersive.) But this is a long-term vision. Don’t expect Lotus to develop an enterprise immersive platform on its own during the next 2-3 years. Instead, Lotus will expand relationships with Immersive Internet ISVs with which it partners, and work with those partners to integrate the immersive technology ever more deeply with products in the Lotus communication and collaboration portfolio. As the business value of the Immersive Internet in the enterprise becomes clearer and more widely understood over time, IBM will be right there in good position to capitalize on the growing opportunity.