The Coaches Centre is a new immersive environment for sports coaches and coaching education professionals worldwide, in affiliation with the International Council for Coach Education (ICCE). The ICCE’s mission is to create awareness of sports coaching as a profession, standardize coaching education requirements around the world, and provide insight and advice for rules committees and sports-related organizations. The mission of The Coaches Centre is to cultivate sport coaches around the world via a unified destination and foster collaboration and knowledge sharing across the spectrum of sport coaching disciplines.

The Coaches Centre has the potential to modernize the sports coaching profession. Initially, sports coaches and coaching educators will use the immersive environment to deliver self-paced learning, 3D real-time interactive collaborative learning and training, and face-to-face meetings and events. Coaches and coach education professionals will be able to deliver theoretical, practical, and physical coach education — the latter typically requiring a coach educator to travel on-site, today. The Coaches Centre has plans to ultimately turn the immersive environment into a major online destination for a huge swath of the global sports coaching economic ecosystem. 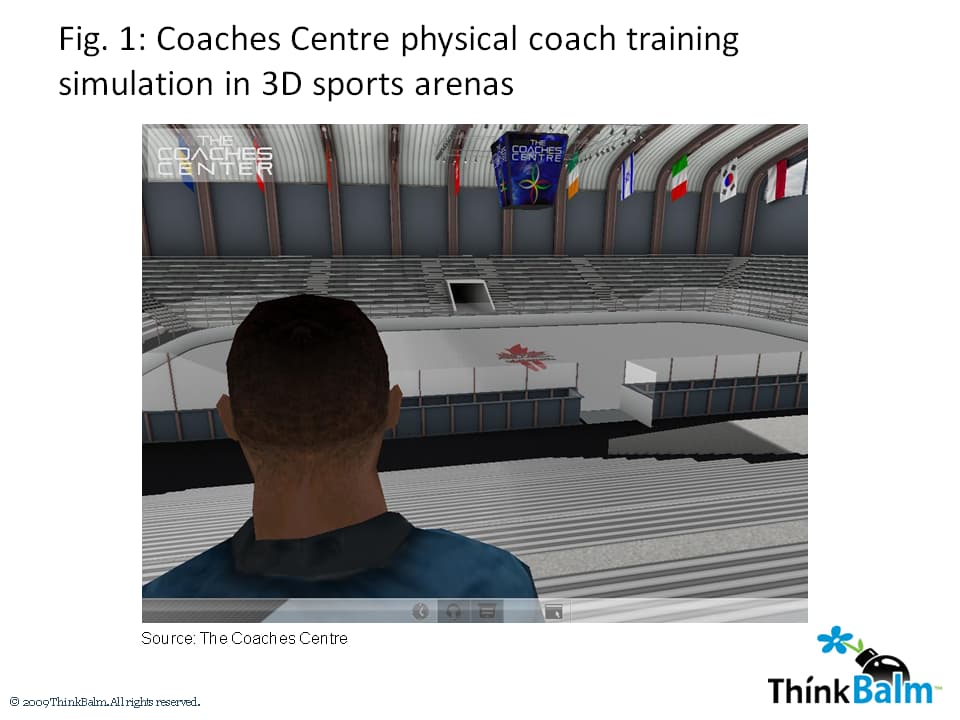 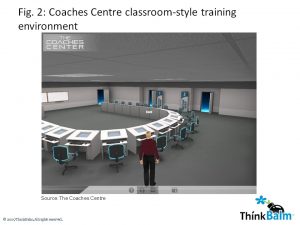 The Coaches Centre will enter broad-scale pilot with 4,000 to 6,000 participants in March of 2009 and the ICCE has plans to take it global by the end of 2009, with premium for-fee services. This pilot will include three courses: one collaborative synchronous education program called “Making Ethical Decisions” and two asynchronous 2D self-paced training programs called “Plan A Practice” and “Nutritional Development for Athletes.” By the end of 2009, The Coaches Centre intends to deliver premium services like sports management, registration, and collaborative training services like coach-to-athlete, coach-to-coach, coach-to-parent, and coach-to-organization education programs.

In mid-February, we spoke with The Coaches Centre president Peter Meli about the business drivers behind his decision to make a massive Immersive Internet investment (we’re talking several million dollars Canadian U.S.). To test and document business value, an ICCE The Coaches Centre  executive team ran a pilot in Canada comparing a two-day coach education program delivered in person with the same program delivered via the Immersive Internet. With the immersive environment, the ICCE was able to evidence a 14X greater return in income to sports association partners (Canadian national sports federations and territory partners) while saving participating coaches in aggregate of $1 million Canadian, compared to the traditional two-day program.

Now keep in mind that Canada alone has 1.7M sports coaches, from local schools through national and international teams, roughly 120,000 of whom go through the education process annually (which amounts to about $60 million Canadian in transactions). Now, picture more than 40 countries involved. The ICCE currently consists of 53 national member groups with an estimated 60 million coaches at all levels from volunteer youth coaches to scholastic and elite level coaches. If the numbers from this initial pilot hold true when The Coaches Centre goes into production, the economic impact could be staggering.

Keep your eye on this project

The Coaches Centre is well worth following for any advocate of the Immersive Internet at work because of the project’s potential to deliver:

Based on findings from the initial Canadian pilot, the cost savings and revenue generation potential for The Coaches Centre is huge. But the potential benefits don’t end there. With vast quantities of performance data and research available to ICCE members who use The Coaches Centre, the coaching process and coach development could be improved. The ICCE says it will put 90% of the proceeds from The Coaches Centre back into each country’s coaching system, which will help countries better identify athleticism at a young age and monitor athletes’ development. Creating a hub for coaching could also create a whole cottage industry of affiliated businesses. This is just conjecture on ThinkBalm’s part, but imagine collective bargaining groups forming to secure lower prices on equipment and sports services. And direct communication among national sports organizations could pave the way for larger international clubs and leagues. We’ll be watching The Coaches Centre closely as it moves forward.