Know when to fold ’em

With my background in genetics, protein biochemistry was never my favorite class. There was always a friendly rivalry between genetics and biochemistry, and it didn’t help that the biochemists always had prettier molecules than we did in our DNA and RNA.  So leave it to a team of biochemists to rub it in with the introduction of Fold-It (see Figure below). Sour grapes aside, I downloaded and played the game. It’s fun – the game aspects, ease of use, nice visuals, rapid play and positive feedback and rewards engaged me. The protein structures are rendered in bright colors and the sum total is enough to get you to forget you are doing (yawn) chemistry. 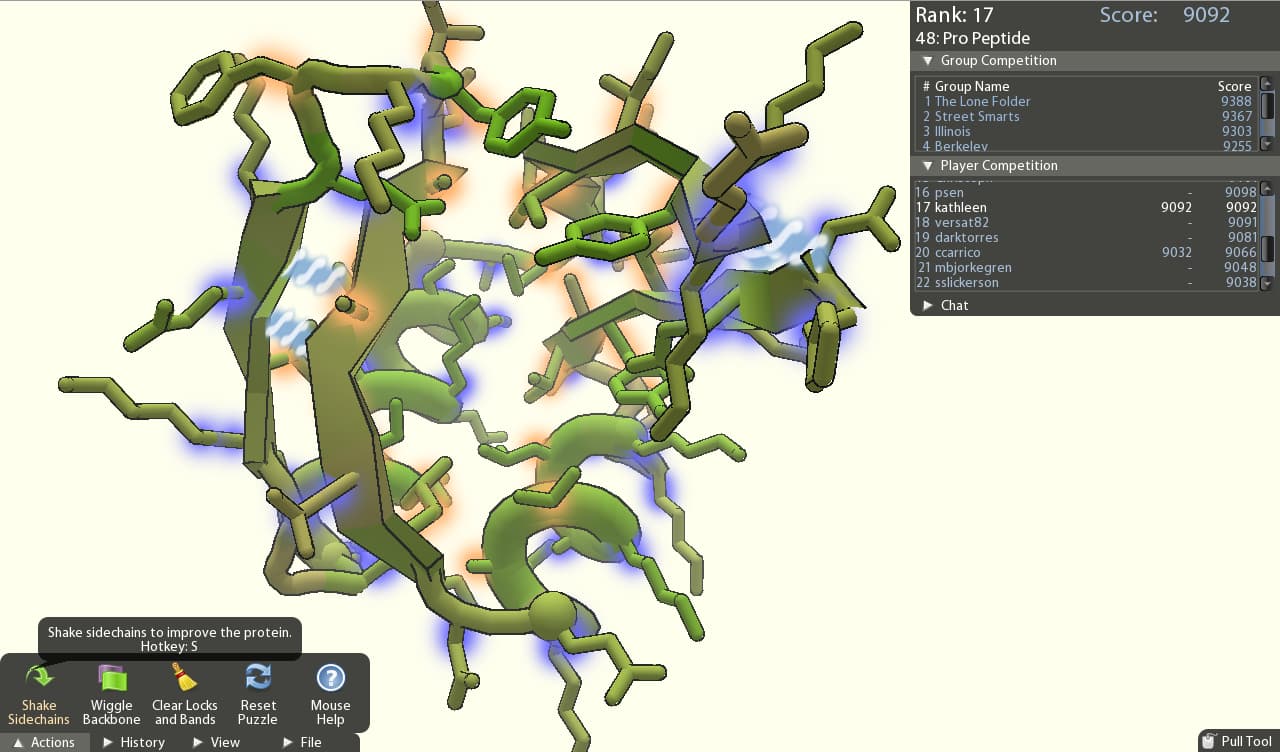 You might expect that the scientific community is using a game to try to educate students and entice them into the field, but what makes this story so interesting is that is not actually the stated goal of the game developers at the University of Washington. In fact, the main idea behind the game is to reach out into the larger world and access the imaginations, creativity, and brain power of more people than the scientific community would normally have access to, in order to solve complex problems. Many more people. This is important because:

The big question looming in my mind centers around the intellectual property that may develop out of this game.  An often joked about lawsuit, Antonio Hernandez vs. Internet Gaming Entertainment Ltd., in the massively multiplayer online role-playing game (MMORPG) sector, could point at the center of the issue: do players have any IP rights to discoveries made in the game environment? This may not be the particular legal case that decides the matter, but when you are talking about potentially discovering something that is turned into a diagnostic tool or pharmaceutical, be assured there will be legal wrangling. But threats of lawsuits should never hamper innovation. So I’m heading back to my desk to fold some more proteins. Come join me!

One of the strengths of virtual worlds like Second Life and massively multiplayer online role-playing games (MMORPGs) like Dungeons and Dragons Online (see figure below) is a facility to create user-defined groups and for people to self-organize into teams, or guilds. In game environments, player groups form around performing a mission: a challenge created and pre-defined by the content provider. All players in a MMORPG pay the same fees and have the same level of access and the same tool sets at their disposal. You’d think that players joining a group would all have a similar goal in playing the game. A common assumption people have when they group up in a virtual environment is that all participants in the group share a common agenda and values and have similar knowledge of the environment and desire to succeed. 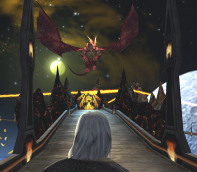 In Dungeons and Dragons Online, one of the games I play, players join a virtual world in which brave heroes do battle with monsters, dragons and otherworldly spirits. Each individual chooses a role that should fit nicely into a self-organizing group. A balanced group has powerful sword-wielding fighters, wizards that can control the battle field, and priests that channel divine power to protect the group. Players know these roles and, in an ideal setting, perform their roles for the benefit of their whole group. BUT – and it’s a big but:

As more businesses create immersive environments and utilize serious game concepts, guild leader skills will become important on the job. Lessons learned from game environments will have a tremendous impact on the Immersive Internet, and my experiences in the dragon-slaying business bring a couple of thoughts to mind:

It’s important to keep in mind that no one category is inherently superior to the others. Each has appropriate use cases. And use case plays an enormous role in making a sound technology selection because no virtual world platform on the market can be used to deliver all four categories of Immersive Internet applications.