Nortel web.alive is an enterprise immersive platform currently in beta (general availability release date not yet announced). Nortel is targeting three use cases in large enterprises: enterprise collaboration, eLearning, and what it calls “assisted community eCommerce.” The company recently announced that PC manufacturer Lenovo is doing a web.alive pilot to support the sales process (see figure). 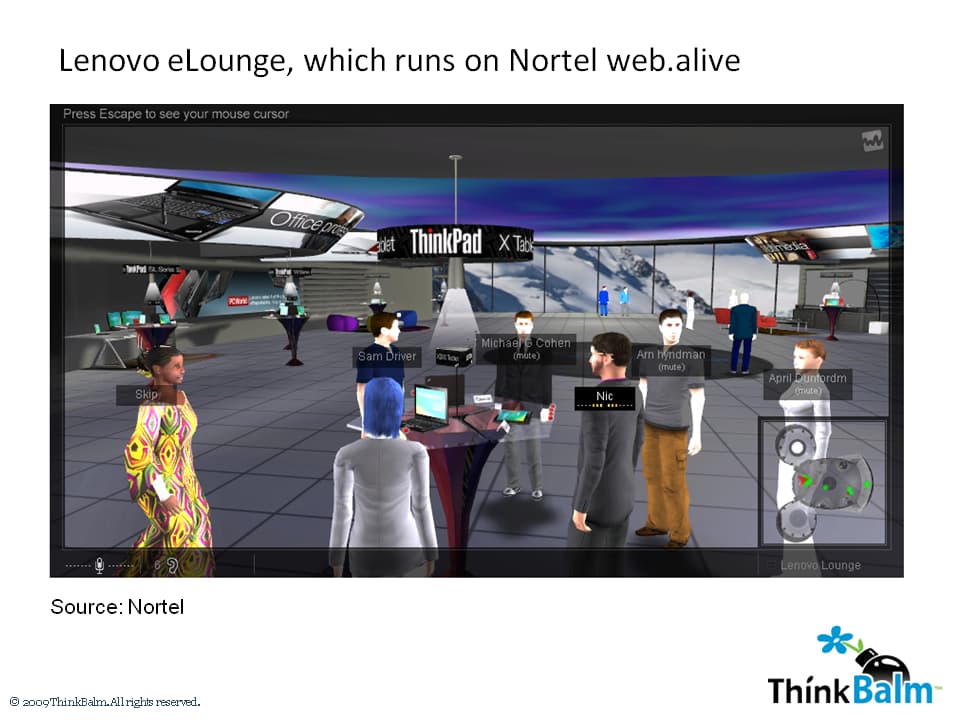 While ThinkBalm’s focus is on enterprise use of the Immersive Internet, rather than B2C use cases like Lenovo’s, we think this announcement is an important one because:

We think this is just the beginning

What’s next step for Lenovo? The company is planning to train 15% to 20% of its sales force to be able to interact with customers and prospects via Lenovo eLounge. The end goal: a higher conversion rate and, ultimately, increased sales. Lenovo’s Ajit Sivadasan said that the typical conversion rate for phone-based sales is 25-30%, meaning that about one out of every three people who call buys something. He suspects that the conversion rate for Lenovo eLounge will be higher than this and could even reach 40-50%. This is purely speculation on our part, but given the quick early success Lenovo is seeing with Lenovo eLounge, we wouldn’t be surprised to see the company start using the technology in additional ways — like internal training (especially for sales people using the environment to interact with customers) and customer training and support.